The Danish rock band VOLBEAT is currently touring Germany, among others, with BARONESS and DANKO JONES. On November 7th VOLBEAT performed in the Frankfurt Festhalle. Before the gig, bass player Kaspar Boye Larsen gave an extensive interview to Lydia and Michael from the Metalogy.de team. Among other things, Kaspar answered many private questions. Read the third and last part of the three-part interview series here on Metalogy.de.

END_OF_DOCUMENT_TOKEN_TO_BE_REPLACED

The danish exceptional rock band VOLBEAT is currently honoring the republic together with BARONESS and DANKO JONES. On November 7th VOLBEAT rocked the Frankfurt Festhalle mightily. After bassist Kaspar Boye Larsen put his two young children to bed in Denmark by smartphone, he talked to Lydia and Michael from the Metalogy.de team. Kaspar told about the message of the songs, his studio, his wishes for the future, his children and much more. Read the second part of our three-part interview here.

END_OF_DOCUMENT_TOKEN_TO_BE_REPLACED

On 7th November the so called Elvis Metalband VOLBEAT was playing with BARONESS und DANKO JONES in the Festhalle / Frankfurt. It was a great gig. Before the concert, Kaspar Boye Larsen, the bass player of VOLBEAT was talking to Lydia and Michael from the METALOGY.de team after bringing his two little children in Denmark to bed per Smartphone. He was telling about the tour, the new album, the songwriting, his Family, his experiences on the W:O:A and the further plans with VOLBEAT and his other bands. Read here part one of the three parts of the English version of the interview.

END_OF_DOCUMENT_TOKEN_TO_BE_REPLACED 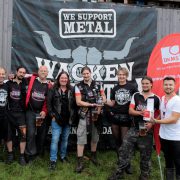 TVINNA – One In The Dark

Lords of Black – Alchemy of Souls