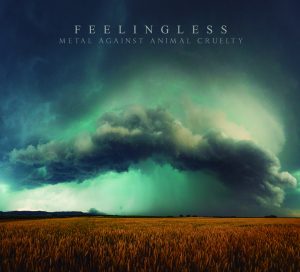 The project was born in the middle of the pandemic, although it was an idea that had been germinating for a long time.

My taste for this kind of projects began when I discovered, a few years before picking up the guitar, „The metal opera Pt. 1“ by Avantasia in a local music store. An album that brought together many of my favorite heavy and power metal singers that, wrapped in a medieval fantasy concept, was for a teenager like me an object of devotion.

If we jump in time to the moment when I was composing the material that would make up the fifth album of my band Rise To Fall, just moments before the pandemic, many of the ideas and compositions that I liked the most did not specifically fit to the band and, as in every album, I had to put them aside.

That’s why when we suffered the confinement, as I had more free time than usual, after finishing the composition of the new Rise To Fall album I had enough time left to decide, once and for all, to embark on this project that had been hanging around in my head for so long. So, I began to collect songs and riffs set aside over time, and to think about the concept of the album.

Still thinking about that Avantasia album that impacted me when I was a teenager, to bring out a project of that magnitude myself with my favorite singers must have had a sense of importance for the person I am today. Something special that would draw attention to one of the causes I am most committed to. And, incidentally, to support it with the profits resulting from the project.

Both my partner and I are animal lovers, and we live surrounded by rescued animals. That is why it seemed important to me that, at a time when the whole of humanity was suffering from a global crisis and its consequences, we could not forget the most vulnerable. Thus, I began to outline the concept of the album around the exploitation and mistreatment of animals.

Moved by this cause, I started working on the album without thinking of any limitations. I was willing to work with the best and most favorite of my artists, so I started composing the songs thinking beforehand about who was going to interpret them.

I told the participating artists all about the project and its charitable nature, with no profit for the artists involved in favor of associations that help animals in need. It was touching to see how my idols sympathized with the cause and joined the project selflessly.

The project is called Feelingless and the name of this first album is „Metal against animal cruelty“. It is, in short, a very varied metal album, with 20 magnificent singers and musicians along 11 tracks.

After the complicated recording due to the circumstances, I thought of Patrick Walch from Noble Demon, as an enabler of distribution and promotion according to the size of the project and its members.

This track is a tribute to one of my favorite artists like Björn Strid from my favorite band Soilwork. He was the first artist I contacted and he agreed to collaborate in the project. The lyrics refer to my favorite Soilwork songs that introduced me to the world of melodic death metal, as well as the dream of touring with Soilwork in Japan.

The drums in this song are played by Lawrence Dinamarca, a Chilean/Swedish musician of an amazing level that I met touring with his former band Nightrage.

The guitar solo is by Pedro J Monge.

This Track is sung by Jon Howard of Threat Signal and Imonolith, and is a track that is a musical departure from what I usually do, wanting to make a nod to Jon’s tracks that impacted me years ago.

The lyrics of this song talk about the agony and bad conditions that animals suffer in macro farms and slaughterhouses, without seeing the sunlight and in deplorable conditions.

The solo on this track is played by Gavin Iedema, synths and keyboards are played by my friend NeroArgento and drums by Lawrence Dinamarca.

This track speaks from the vision of a bull in a bullfight (in Spain there are still people who call art the fact of torturing an animal to death).

The singer is Mikael Sehlin from Degradead and Engel, a talented Swedish musician.

The drums are by Lawrence and the guitar solo by Pedro J Monge.

This song talks about love for animals and the love that animals give back without expecting anything in return.

This song features Ettore and Claudio from Disarmonia Mundi, one of my favorite bands.

I had the pleasure of working with Ettore with my band and meeting him in person, he is another animal lover who, like me, lives with rescued animals. When I proposed the idea of the project to him he said yes right away.

This song is sung by Christian Älvestam, another one of my favorite singers that I discovered back in his time with Scar Symmetry.

Christian is a formidable and super demanding guy who got really involved and took the track to another level.

This track is sung by Jake E of Cyhra and ex-Amaranthe and Rachel ex ETHS and currently in Cage Fight.

It’s a track I composed in the middle of confinement, which is partly the fault of Ola Englund (Youtuber and guitarist in The Haunted) who every week would post a drum kit for musicians to put to music and riff on his bases. It pushed me to make different music than what I usually create. The lyrics of this track talk about covid and confinement.

It’s a track with a brutal mix as Rachel screams and Jake provides the melodic vocals, accompanied by some brutal guitar solos from Pedro with a keyboard solo from Diego.

Lawrence’s drumming takes this track to another level from what I had written.

This track talks about the feeling of guilt. One of the ones Iñigo composed, being the first thing he showed me. Björn Strid sings here as well.

Pride talks about the courage that some people have in the fight against animal abuse, how they selflessly give their lives to help animals.

For this song I contacted Daniel Heiman, for me one of the best power metal vocalist in history, I discovered him many years ago when he released his first album with his ex band Lost Horizon, and I had the pleasure to see him live in Bilbao (being supported by Vhaldemar, Pedro J Monge’s band).

Daniel is a fantastic guy who also has rescued animals, I told him about the idea and he was excited, almost as much as I was to be able to have him in my project.

Fear talks about the fear of animals just like our own fear.

It is another song that Iñigo composed, being of the same style but different from what I usually compose, but in which we understood each other well and worked in harmony.

It was a song to scream and we contacted Vile from Mors Principium Est, who did a great job.

The guitar solo is by Dann Hoyos, guitarist in my band and one of the best guitarists you can find today.

Rage speaks of the rage and despair of losing a loved one in the animal family.

This song is also sung by Mikael Sehlin and one of the guitar solos and the acoustics are by Marios from Nightrage, a fantastic person I met touring with them in Europe.

It is a song composed by Iñigo, who was also in charge of the lyrics, counting with the singer of my band Rise To Fall „Dalay Tarda“ for it, a song with Iñigo’s touch, different from what I usually compose and performed by Dalay.

The artists that are in this first album are:

Music and lyrics by Hugo Markaida

Iñigo Lopez music in Fear, Guilt and Anxiety and lyrics in Anxiety