Anniken – Climb Out of Hell

“To release my solo album is both incredibly exciting and completely terrifying at the same time. As part of a band, you do not feel as vulnerable. But here I stand alone. Completely exposed and I really hope that people will love this album as much as I do. It is not quite the same as any of my former projects. This is just me, just Anniken. My songs, my stories. It doesn’t easily fit into one specific metal subgenre, but I don’t like being labeled anyway. I wanted the album to be melodic and heavy with hints of all my inspirations such as Metallica, Pink, Iron Maiden, and Linkin Park, while at the same time not sounding like any of them.”

“It is fun to write with other artists and see how the songs turn out both in the studio and live. But writing with others also means to compromise. And that is one of the main reasons behind starting my solo project. I wanted to show what I could do, without the guys (yes, the bands I’ve played with always consisted of all guys and me). It is, unfortunately, easy to underestimate female artists in metal. At least, that is my experience. There aren’t as many women within the genre as there are men. Very often I experienced that people just assumed everything was written by the men in the group. I don’t mind being “just the singer”, but I would love to show the world that I am, in fact, more.” adds Anniken.

“Firstly, I want people to enjoy the music. Secondly, I want them to notice the lyrics. I love listening to music while reading them and trying to understand the stories that are being told. I hope that the listeners feel the same way. I like to also add, that some of the songs were written a while back. I had others that didn’t make the cut. The song Star was originally a song my husband and I wrote for our band Darkest Sins. It was part of our first release. I have always loved the song and I have wanted to do my own version of the song for a long time. The song No Name was the last song I wrote for the album. I had decided the album needed one more song, but kept postponing writing it. Since we didn’t have a title, we just wrote “No Name” in the plan for the studio, and eventually, I came to love that title, so I decided to write a song with the title No Name. I always have ideas for songs; in my head, on my phone, or written down in notebooks. There will be more music. As long as there is a want for it, I will make it.” 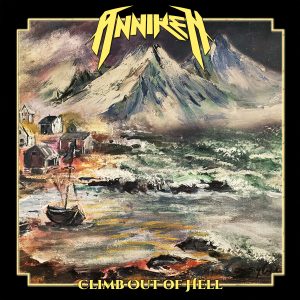